How I barely escaped a 50000PKR cyber fraud?

On the night of 16th May 2020 I got approached by a person online (as I do freelancing so I often deal with international clients), he was from Morocco he asked me that he wants me to make a bank transaction to one of his clients in Pakistan of 50,000PKR and for that he'll pay me 550$, when I asked the reason that why isn't he paying his client himself, he said that the client needs money instantly but client's Payoneer is not working well so he wants me to send his client money through the bank that's the reason he is ready to pay some extra bucks so that his client receives the money on time, that was a pretty good deal for me. I obviously asked him that first, you'll send me 550$ once I receive money from you I will make the bank transaction, he instantly agreed and asked me for my Payoneer ID.

I gave him my Payoneer ID, he asked me to wait for 5-10 mins to receive money in my Payoneer and well right after the mentioned time, he sent me a screenshot from his laptop, that was a legit Payoneer page, with the current transaction with my email and 550$ mentioned on it. But when I checked my email and Payoneer I had not received even a single penny. When I asked him, he said that it's Saturday so transactions take time, look it's completed from my side and I shared the screenshot with you as well. 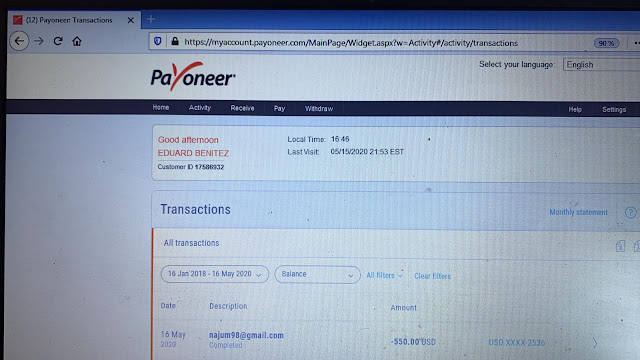 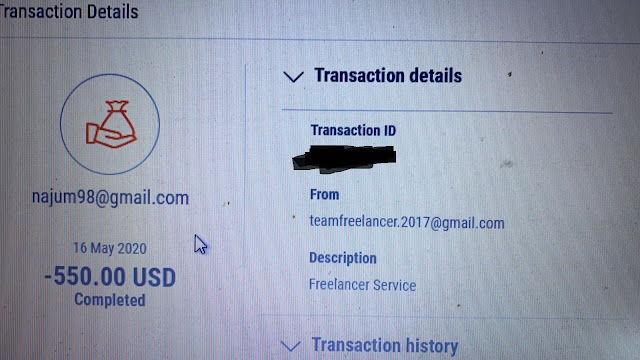 I opened the app on my mobile to send money and was about to send but my brother persisted that I should look at the email once again and not send the money now. Well, it was a weird and stressful situation with that person constantly calling me to make the transaction, I receiving a legit-looking mail from Payoneer and no money showing up in Payoneer. It had happened with me in the past when Payoneer took some time to show balance in my Payoneer account so I thought this situation same as that. But upon a final investigation of the email, we found something bit unusual in the email I received from Payoneer stating 550$ money. 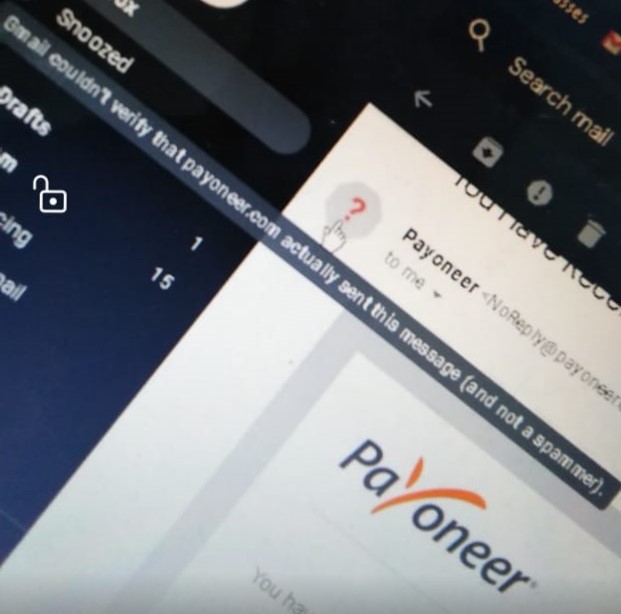 The 550$ Payoneer email had a question mark logo on it with a message showing up "Gmail couldn't verify that Payoneer.com actually sent this message (and not a Spammer)", I checked all the previous emails I once had received from Payoneer but none of them had this message on them. Woah, just when I was about to lose 50000PKR, by the grace of God, somehow I peeked onto this message by Gmail, (I don't know if Gmail was doubtful about the email then why it ended up in my inbox and not spam folder).
I asked the person that the email I received from Payoneer looks suspicious and now he got absolutely furious, trying to put on pressure and threatening me that he'll report me to the freelance community and Payoneer as a spammer, and then he blocked me.
To summarize it, I have never experienced such a real-looking social engineering attack before, as you can see yourself the two emails look exactly the same. There was just a minor difference between the emails which a person might ignore and not consider. If that message wouldn't have appeared from Gmail then I might also have ignored the Question Mark and made the transaction.
I intentionally have not blurred the email address of that scammer to expose him. I have contacted Payoneer on this and will update this article once I hear from them. Thanks and stay safe from such frauds.
tags: phishing - social Engineering - cybercrime